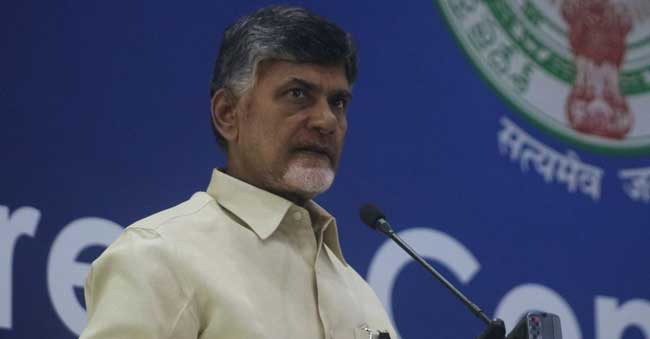 The Andhra Pradesh Chief Minister and leader of the Telugu Desam Party N Chandrababu Naidu said that Prime Minister Narendra Modi talked with arrogance in the Lok Sabha and “did not think about the emotions of our Telugu people”. He was alluding to the PM’s speech during the debate on the no-confidence motion in the Lok Sabha on Friday.

The Lok Sabha was debating the no-confidence motion moved by the TDP over the central government failed to give an special status to Andhra Pradesh. Responding to the Prime Minister Speech in Lok Sabha, Naidu said PM Modi speech indicates as if Andhra Pradesh is not part of India. He has arrogance because he had the numbers,” said Naidu while naming the no-confidence motion as a war between majority and morality.

Clarifying why his party moved the no-confidence motion against the Modi government he said the movement was moved after his party’s efforts to look for the Center’s help for special category status was failed.Chandrababu Naidu stated that “It is very disappointing to see the country’s PM taking AP’s wishes and sentiments for granted. Rejecting our demands just because we do not have a majority shows the insensitivity of the PM against our State,” Naidu later said in a tweet using the hashtag #AgainBJPCheatedAP.

“The NDA government has shown today that they don’t believe in democratic values. The Prime Minister was permitted to represent over 60 minutes, though we were not given in excess of a couple of minutes to react,” he said in another tweet. Naidu said the prime minster’s reply in the Lok Sabha has disillusioned five crore people of Andhra Pradesh as they had trusted that he will show some repentance over not fulfilling the promises made to the state and correct his missteps.

Expressing that Andhra Pradesh has been cheated once more, Naidu request people of AP to stage protest show on saturday. Naidu also took solid special case to Modi’s comment that he was grabbing battle with Telangana and reviewed that even before bifurcation of Andhra Pradesh he had been requiring a amicable solutions through talks. At the end of the meet AP CM Said That “My state and its interests are everything to me,” he said. Chandrababu Naidu planning to leave New Delhi today to thank the parties which supported the no-confidence motion moved by the TDP.