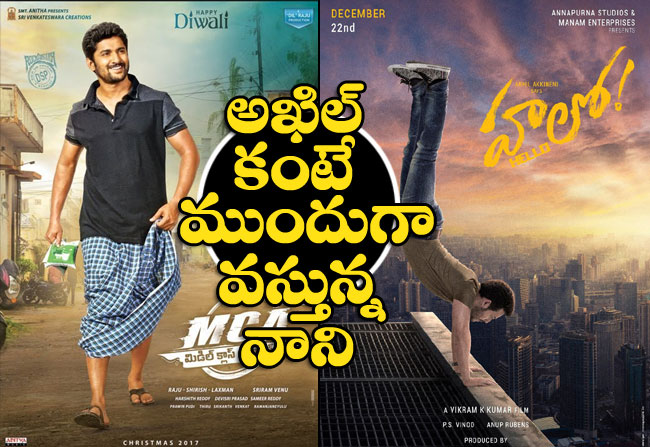 Natural star Nani is up with 7 consiquetive success is ready with his next film to get his 8th success film with ‘middle class Abbayi’. Venu Sriram is to direct the film under Dil Raju’s production. The expectations has raised high as Fidaa beauty Sai Pallavi is acting in the film. Director Venu Sriram is Directing the film to reach everyone’s expectations. At the beginning of the film the crew decided to release the film by Christmas. They planned to release the film by December 22as a Christmas gift. But, the crew has prepone the film to December 15th. Nani Middle Class Abbayi postpone for Akhil.

Now, Nagarjuna is planning to release Akhil and Vikram Kumar combination film Hello as a Christmas gift. Nagarjuna has discussed this issue with Dil Raju and made him to postpone Middle Class Abbayi film. With this without any competition Akhil is to come solo for this Christmas. It is to see if Akhil bag’s a success at least with this film. The movie crew is working on the final schedules. Kalyani Priyadarshini is pairing up with Akhil for this movie. Akkineni fans are eagerly waiting to see the movie on big screen.

WhatsApp
Facebook
Twitter
Previous articleMamatha Banerjee becomes a victim of her own plans!
Next articleHelicopter door falls from the skies to the terrace in Hyderabad!