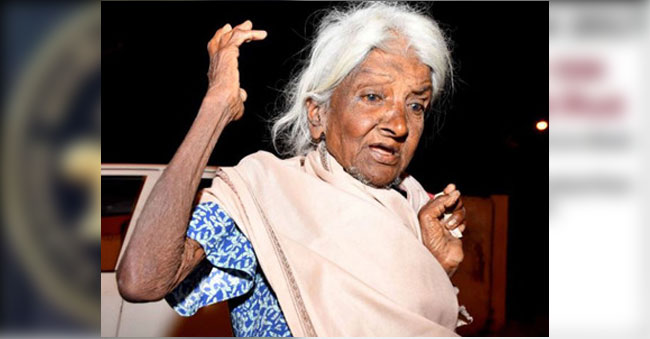 She is weak, old but her heart is young as she donated all the money that she begged near a temple. They say, charity begins at home, but for this lady, the charity began in her heart.

An 85-year-old beggar, from cultural and a city of palaces, named MV Sitalakshmi, donated a sum of 2.5 lakhs to Prasanna Anjaneya Swami Temple, Vontikoppal where she begged over a decade.

She used to work as a domestic maid, as she grew older she started begging to earn her livelihood.Sitalakshmi, lives with her brother and sister –in – law and never wanted to burden them, started spending her days at the temple, also participating in the daily proceedings of the temple.

According to temple authorities, she donated about 30000 for Ganesh Chaturthi and later deposited a total amount of 2lakhs in the temple’s bank account. Her only request is to provide prasadam to devotees and improve amenities in the temple with that money.

She was also felicitated by local MLA for her generosity, and the temple chairman described as a lady that accepted what was given to her by devotees and never demanded anything herself.While Sita Mahalakshmi said, she is happy to donate the money to the temple that took care of her and she wants the money to be used for good cause.

People find it as an inspiring story to read, but how many of us can follow.