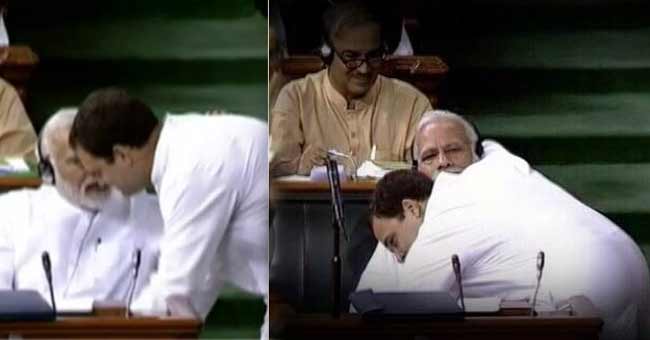 The Indian National Congress President Rahul Gandhi has made his own impact for the first time in entire Political career. His today’s gesture followed by a heated speech explains everything.

After Galla Jayadev opened up the No Confidence Motion debate, Rahul Gandhi gave a staggering speech without interruptions. With rather clarity and fluency, he made several allegations on the Indian Prime Minister. From Rafael Aviation Company to the loan waiver scheme in Karnataka, Rahul accuses Modi of favoring certain people and close aids of BJP for his personal promotion. Despite his furious speech, he claimed that all his allegations are professional but not personal as he always has good thoughts about Modi and his Political life. Despite his professional rivalry, Rahul declares that he loves Modi because he is in Congress.

Concluding his speech, Rahul without a clue went to the Indian Prime Minister and hugged him which left the entire house in awe. Modi who didn’t see that hug coming went into an astonished state and later he called the Rahul back to give him a sweet pat. Personal words have been exchanged between the two big leaders.

While Congress leaders gave a standing ovation to Rahul’s act and celebrated their boss’s gesture by slamming their tables, some BJP leaders became mum. Speaker Sumitra Mahajan, however, condemned this act as anti to Parliament rules. The picture of Rahul hugging Modi is now going viral across the internet and social networking sites. No wonder if this act of Rahul would become famous worldwide.